People probably do not give all that much thought to everything that is hidden under our feet. And thinking about it in the middle of a city in fact makes little sense, as the things hiding under the surface make for some unpleasant sights, but when it comes to the Karst, this is quite another story. 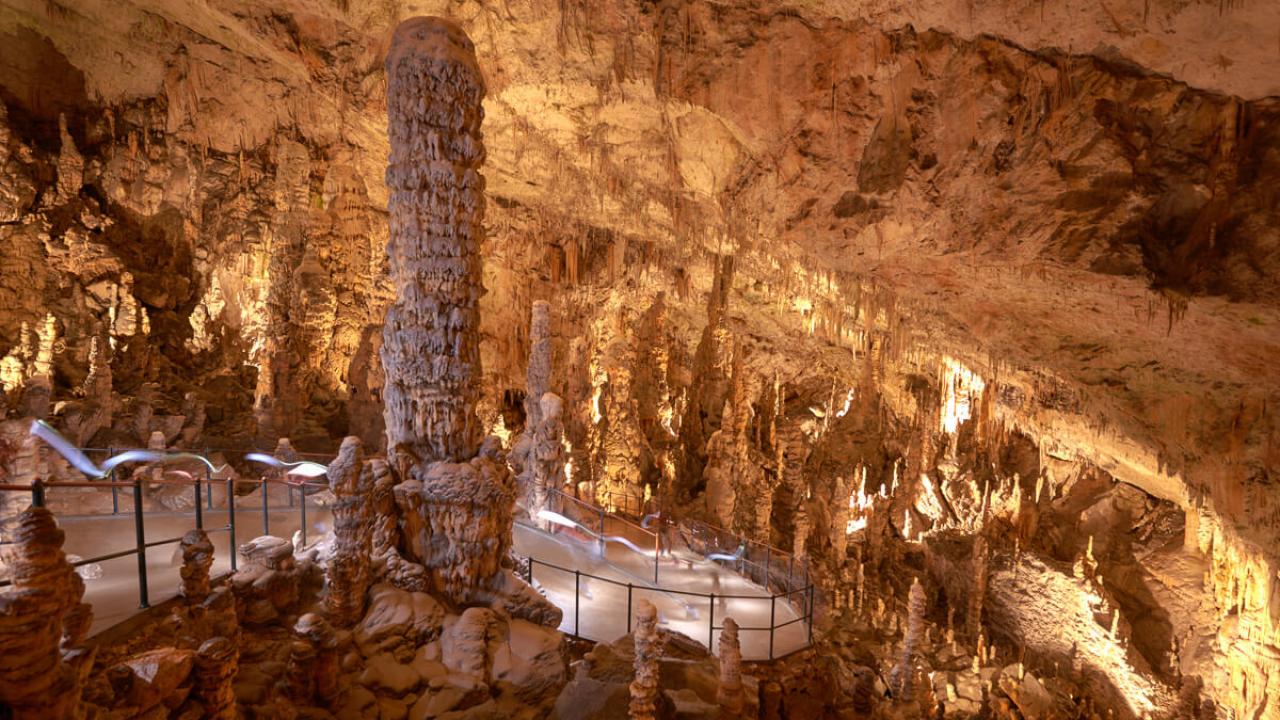 The subterranean world of Postojna has been exciting people's imagination and arousing their curiosity for two hundred years. This new world, which opened up after the discovery of Postojna Cave, provided people with all sorts of ideas – ideas about the cave railway, about the electric lights at a time when not even Slovenia's capital Ljubljana had any, about the adventures reminiscent of the novels written by Jules Verne.

However, it was not people who came up with the idea of putting a skyscraper or a cathedral inside the cave. The cave itself made sure of it. Along more than 24 kilometres of Postojna Cave, the subterranean scenery changes just like on the surface: you can see soaring mountains, hear the murmur of rivers and walk around vast subterranean halls with entrances to narrow passages. And if you explore this world like a drone, you may bump into a skyscraper fifty metres below the surface.

It is a well-known fact that life under the surface of the Earth is slow, everything taking a long time. Compared to millions-of-years-old caves, our lives are merely fragments in the Earth's long history. It is believed dripstones (speleothems) grow an average of one millimetre over a span of ten years, however, this is a somewhat inaccurate estimate, since they tend to grows faster in some parts of Postojna Cave, and slower in others, since flowstone gets deposited at varying rates. The growth of a few millimetres can take between a few years and thousands of years, depending on the conditions that affect the intensity, water composition and continuity of the flow of water the flowstone gets deposited from.

Trying to explain the complex processes in an easily understandable way, the only thing that can be said with certainty is that dripstones grow really slowly ... even more slowly than the traffic moves during an early morning rush hour.

The oldest dated stalagmite located along Postojna Cave's tour route is called the Skyscraper, and its sheer grandness speaks volumes about its age – it is 16 metres in height and so wide that, seen with the naked eye, it does not look like a dripstone, but rather like a striking flowstone wall located beside the tour path. Scientists used a special technique to date it and its official age is not "so old it's impossible to pass", but has been estimated at about 150,000 years.

By way of contrast: the formation of Postojna Cave goes back to approximately three million years ago when it started to be formed in 70-million-year-old limestones, which means that the Skyscraper is still in a "juvenile" stage. Although the Skyscraper is the oldest dripstone located along Postojna Cave's tour route, there are a number older ones hidden elsewhere inside the cave – some of them are older than half a million years. 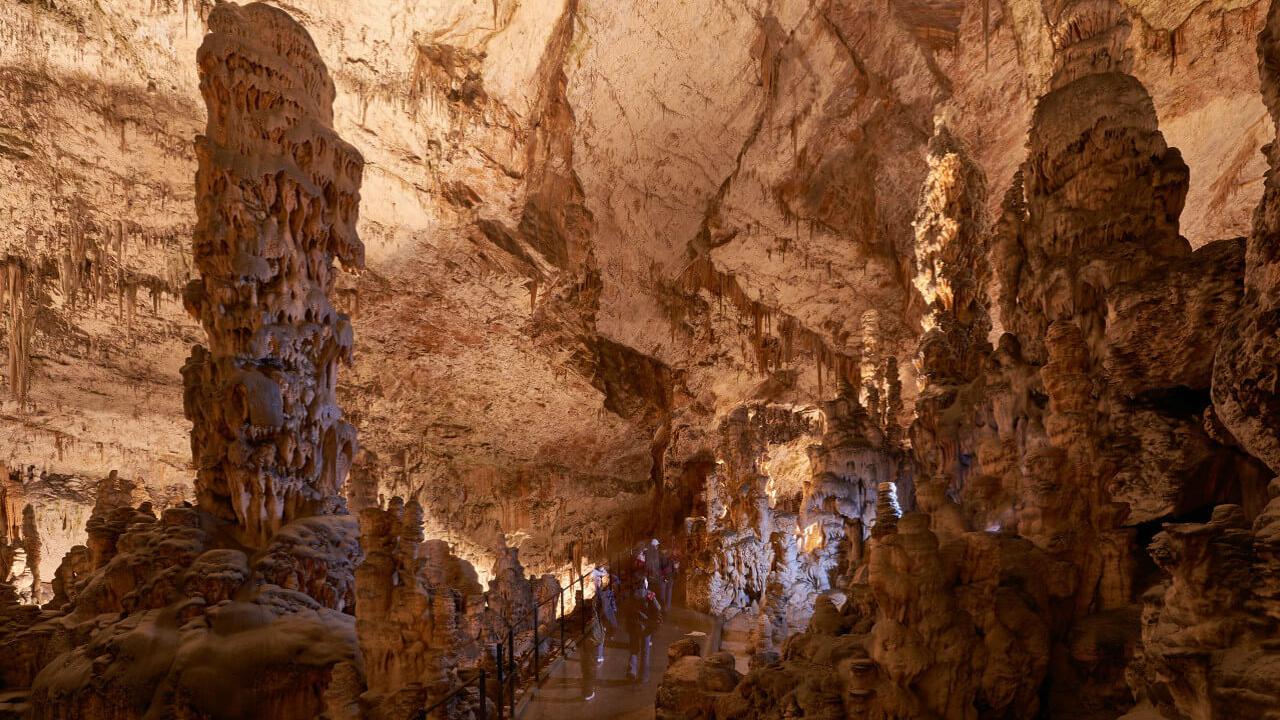 Vastness is one of Postojna Cave's attributes most often singled out by visitors, scientists and explorers whenever talk turns to the cave. It thus comes as no surprise that the subterranean Skyscraper does not stand all alone. Resembling a dripstone forest, there are a number of other tall, magnificent and ornament-rich stalagmites standing next to it, all of them slowly, yet persistently making their way to the ceiling. They are called the Giants. Viewing them from the top of the Calvary (Great Mountain), visitors can enjoy one of the most breath-taking views inside Postojna Cave.

The Skyscraper is located just below the top of the Calvary, a collapse hall that emerged when the ceiling collapsed. The Calvary has a volume of more than 168 thousand cubic metres. It is so big London's St Paul's Cathedral – with an extension or two – could easily fit inside of it. 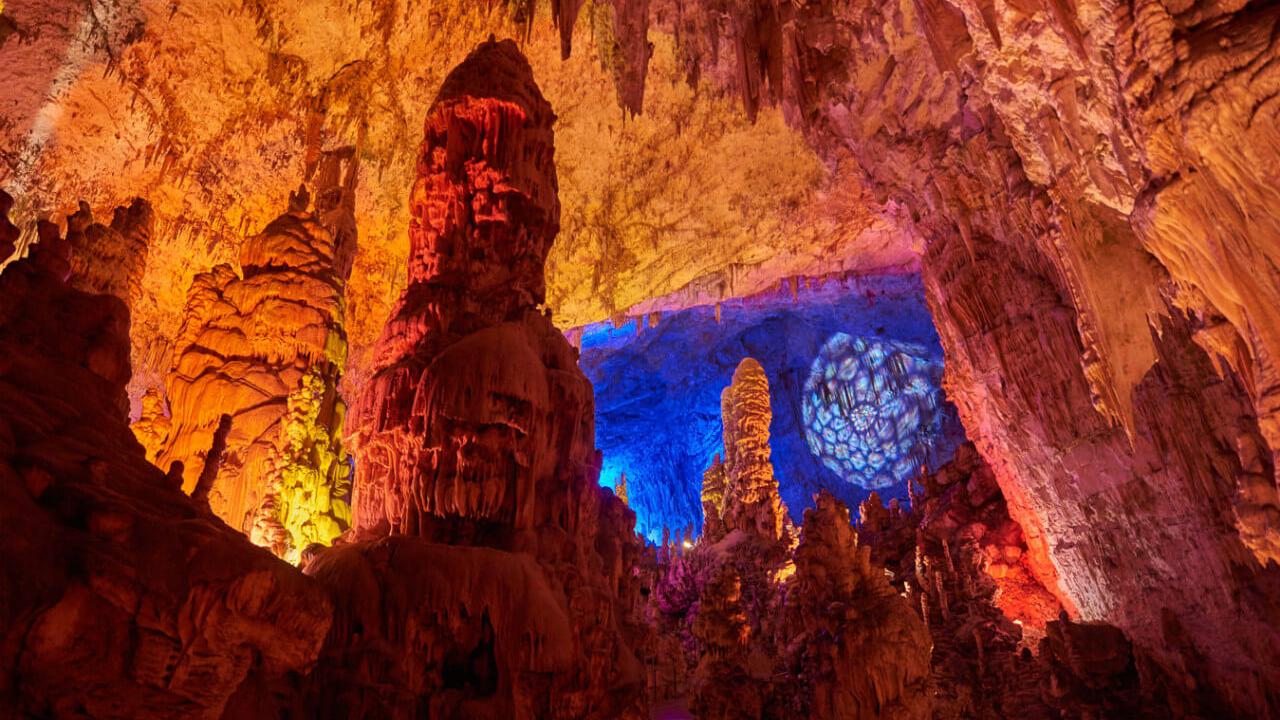 But no need to worry, if you decide to go up the mountain, nothing will fall from the ceiling, because these day this natural vault is rock-solid. The ceiling inside the cave collapsing is nothing unusual, however, when it comes to this, Postojna Cave does offers some one-of-a-kind scenes. Huge collapse blocks – remains of the former cave ceiling – are clearly visible on the way through the cave. While you are breathing hard walking uphill to the top of the mountain, you can see some amazing cave formations still growing on the cave remains, which have been part of this stunning landscape for thousands of years. The top of the Calvary boasts some breath-taking views with the most striking feature being the Giants – giant, colourful dripstones competing against one another, trying to be the first to touch the ceiling.